The US yield curve spread (difference in yield) between the 2 year and 10 year US Treasury interest rates has recently reached its narrowest in over a decade.  Thus the heightened discussion.

It should be noted that the US yield curve has not yet inverted and there is a lag between inversion and recession, on average of 1 to 2 years.  See graph below.  I am not sure I’d call the Yield Curve still “Bullish” all the same.

At the same time, the risk of recession does not currently appear to be a clear and present danger.

The picking of recession is obviously critical in determining the likely future performance of the sharemarket.

As a rule, sharemarkets generally enter bear markets, falls of greater than 20%, in the event of a recession.

Nevertheless, while a recession is necessary, it is not sufficient for a sharemarket to enter a bear market. 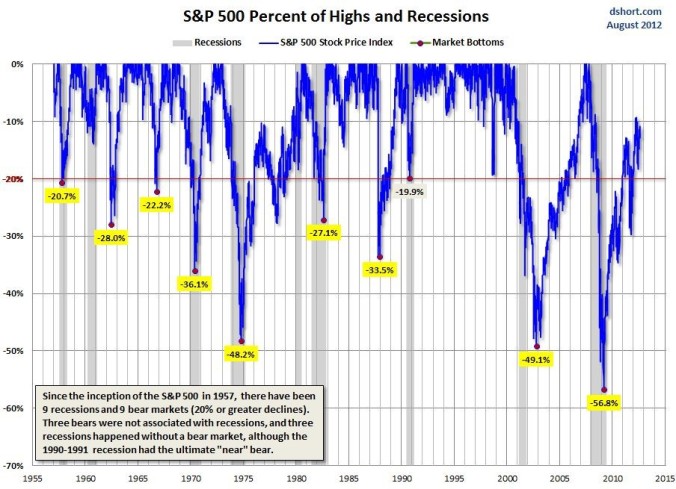 The current US sharemarket bull market passed its 9 year anniversary in March 2018.  The accumulated return is over 300%.

Mind you, we have to be careful with averages, I like this quote:

“A stream may have an average depth of ﬁve feet, but a traveler wading through it will not make it to the other side if its mid-point is 10 feet deep. Similarly, an overly volatile investing strategy may sink an investor before she gets to reap its anticipated rewards.”

Importantly, investors should not use the shape of the yield curve as a sole guide as to the likelihood of a recession.

Tightening of financial conditions is also a key indicator, particularly central banks raising interest rates (or reducing the size of their balance sheet as in the current environment) e.g. US Federal Reserve, but also tightening of lending conditions by the large lenders such as the commercial banks to consumers and more particularly businesses.